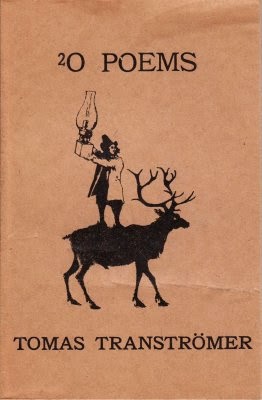 They turn the light off, and its white globe glows

in a glass of darkness. Then a rising.

The hotel walls shoot up into heaven’s darkness.

Their movements have grown softer, and they sleep,

but their most secret thoughts begin to meet

on the wet paper in a schoolboy’s painting.

It is dark and silent. The city however has come nearer

tonight. With its windows turned off. Houses have come.

They stand packed and waiting very near,

a mob of people with blank faces.

Once there was a shock

that left behind a long, shimmering comet tail.

It keeps us inside. It makes the TV pictures snowy.

It settles in cold drops on the telephone wires.

One can still go slowly on skis in the winter sun

through brush where a few leaves hang on.

Names swallowed by the cold.

It is still beautiful to feel the heart beat

but often the shadow seems more real than the body.

beside his armour of black dragon scales.